Back To Home
Ministerial Meetings January 16, 2020 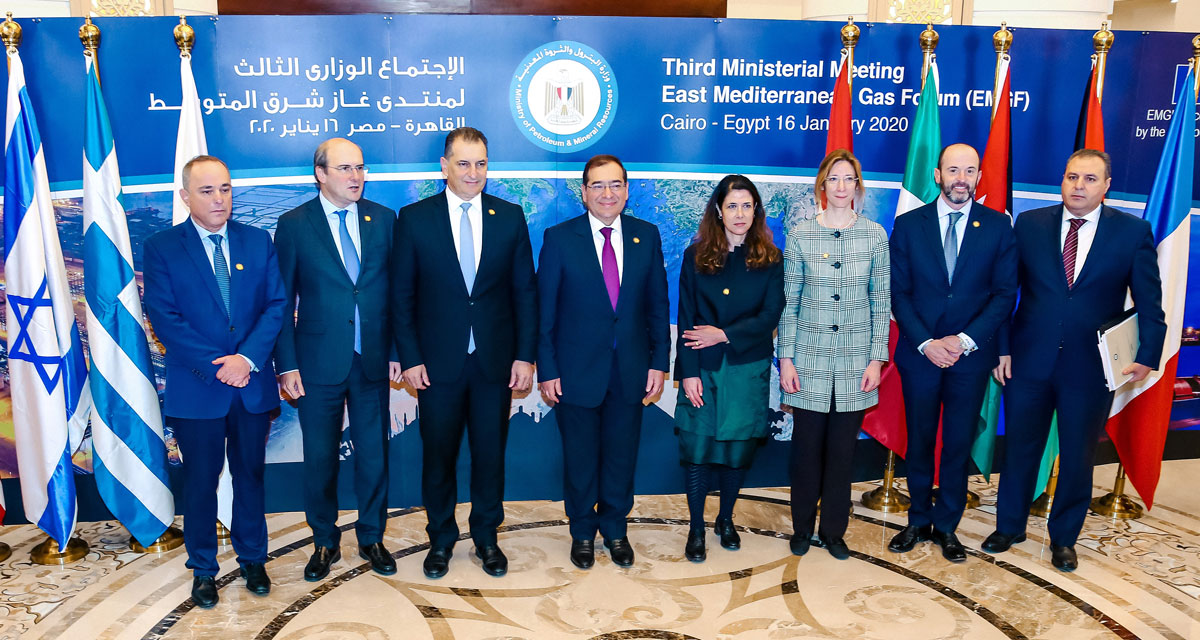 The Third Ministerial Meeting of the East Mediterranean Gas Forum (EMGF) was convened in Cairo, Egypt on January 16th, 2020 under the presidency of His Excellency Tarek El Molla, Minister of Petroleum and Mineral Resources of the Arab Republic of Egypt, as the current President of EMGF Ministerial meeting.

The meeting was attended by the Cypriot, Greek, Israeli and Palestinian Ministers in charge of Energy,ــ the Italian Undersecretary for Economic Development and Jordanian Representative, as the heads of delegations of EMGF Founding Members. It was also attended by representatives of the European Union and the World Bank. Representatives from the United States and France also joined the meeting as guests.

The meeting witnessed the major step of initialing the EMGF Statute, confirming the finalization of its discussion. The Statute establishes EMGF as an international intergovernmental organization, based in Cairo. The success in concluding the Statute in a record time of 12 months and the members’ enthusiasm to expedite establishing its bodies and executing its activities express their deep belief in its importance. The EMGF Founding members which are also members of the European Union will submit the initialed Statute to the European Commission for review. The Statute will be signed by the Founding Members once compatibility with EU law has been ensured.

The Founding Members affirmed that EMGF, fully respecting the rights of the members over their natural resources in accordance with International Law, will serve as their platform to create a structured dialogue on gas, and set an agenda to formulate common strategies and regional gas policies based on shared vision and backed by governmental cooperation for the prosperity of the region.

The EMGF expected influence on utilizing the full regional potential was also reflected in the desire of many international parties and organizations to engage in it with unhesitant support to its activities.

In this regard, the Members noted with deep appreciation the EU support to EMGF activities over the period 2020-2021. They also took note of the ongoing  study carried out  by the World Bank; titled “East Med Gas – Master Concept of Phased Infrastructure Corridor” and look forward to its finalization.

The existing and potentially new gas infrastructure; including interconnection pipelines and export facilities at EMGF Members that include producers, consumers and transit countries, together with their excellent inter-relations, will enable the quick monetization of East Mediterranean gas reserves, reduce the cost of production and transportation, and ensure delivery to markets in competitive prices for the people’s welfare.

Recognizing the crucial role of the private sector in achieving the EMGF objectives, the Members welcomed the establishment of the Gas Industry Advisory Committee (GIAC) and its inaugural meeting held in Cairo on November 6th 2019. They stressed the importance of GIAC as a permanent dialogue platform within the EMGF, between Government representatives and industry players; including state owned entities, regulatory authorities, gas business enterprises, industry entities and international financial institutions, which will undoubtedly contribute to the EMGF’s activities. The Ministers expressed their appreciation for the finalization of the GIAC Rules and Procedures that will open the way to the progressive expansion of GIAC membership.

The Members agreed to convene the next Ministerial Meeting in Cairo in the second quarter of 2020.

The Heads of delegations expressed their deep appreciation to His Excellency Mr. Abdel Fattah El Sisi, President of the Arab Republic of Egypt, as well as their sincere gratitude for the Government of Egypt for the warm hospitality and excellent organization.