Back To Home
Ministerial Meetings March 9, 2021 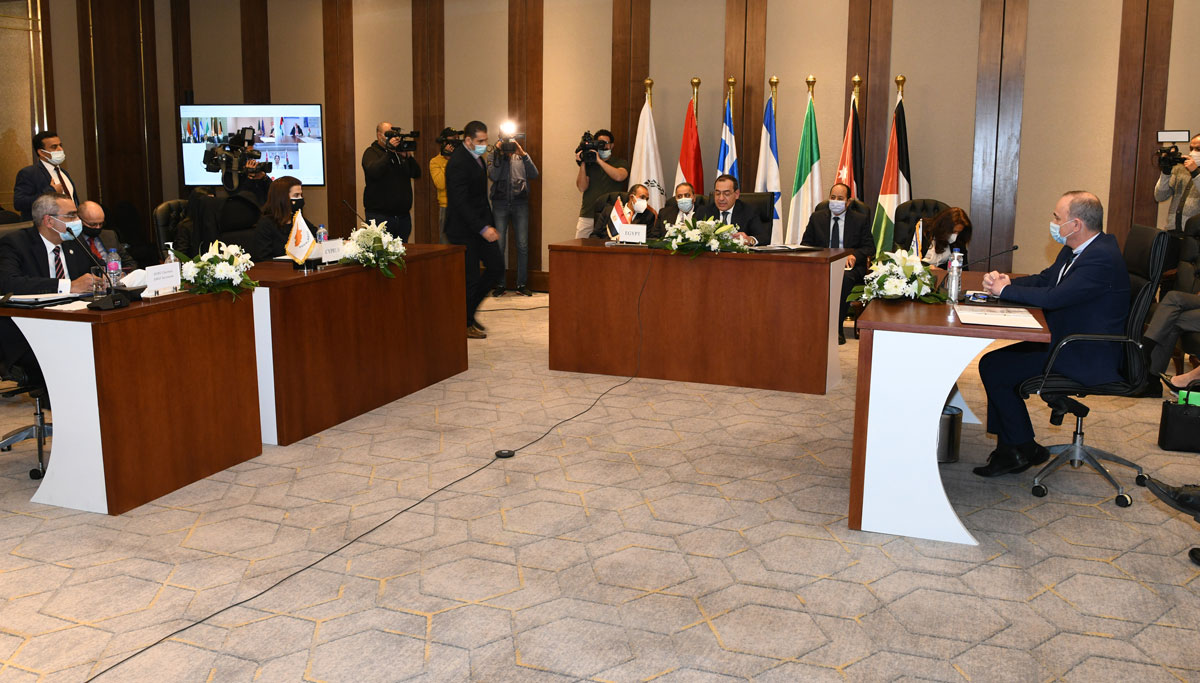 Today, March 9, 2021, the fourth ministerial meeting of the East Mediterranean Gas Forum (EMGF) was convened in Cairo, in the Arab Republic of Egypt. The meeting was attended by the Cypriot, Egyptian, Greek, Israeli, Jordanian and Palestinian Ministers of Energy.  And the Italian Vice Minister of Economic Development, as the heads of delegations of the EMGF Founding Members.

The Founding Members announced the entry into force of the EMGF Statute that took place on 1st of March 2021. The Ministers acknowledged this significant milestone for the serious steps and successive achievements realized since the Forum’s launch in January 2019, by the intensive cooperation among Founding Members, and the tremendous efforts exerted by their professional teams.

The Founding Members celebrated holding their first Ministerial Meeting of the EMGF as a full-fledged intergovernmental organization based in Cairo. They reaffirmed the EMGF objectives as a platform for a structured policy dialogue on natural gas. They also noted that the EMGF would lead to the development of a sustainable regional gas market, unlocking the full gas resources potential in the East Mediterranean region in full respect of the rights of its Members over their natural resources in accordance with international law.

The meeting discussed the way forward with the forum’s organizational matters, including continuing Egypt’s presidency of the EMGF till end of 2021, through H.E Tarek El Molla as the EMGF President. The first Presidency term, according to the Statute, will start on January 2022, when the first Founding Member in alphabetical order (Cyprus), will assume this role.

The meeting also appointed Mr. Osama Mobarez – Egyptian Undersecretary of Ministry of Petroleum and Mineral resources as an Acting Secretary General of EMGF.

The meeting also discussed the EMGF activities including developing a Long Term Strategy (LTS) for the EMGF and two new initiatives on “Gas Decarbonization” and “LNG as a fuel for vessels” in line with the environmental global trends. The EMGF Members will form dedicated working groups of Experts for developing the strategy and for each of the initiatives. Subsequently, the Ministers took note of the progress achieved on preparing a study on “Gas Supply and Demand in the East Mediterranean”, in line with the gas market assessment and look ahead. The study, supported by the EU, is one of the activities taking place by the EMGF Gas Industry Advisory Committee (GIAC).

The Ministers adopted the EMGF Program of Work for 2021. It compiles the main milestones targeted on both the organizational setup finalization, together with the Gas cooperation activities, including studies, initiatives and workshops.

The founding members agreed to convene the next Ministerial Meeting in Cairo during the last quarter of 2021.

The Ministers expressed their deep appreciation to the Arab Republic of Egypt under the leadership of the President of the Arab Republic of Egypt, President Abdel Fattah El-Sisi for providing its utmost support as a host country, and for the Egyptian Minister of Petroleum and Mineral Resources H.E. Tarek El Molla for the smooth successful management of the establishment phase.