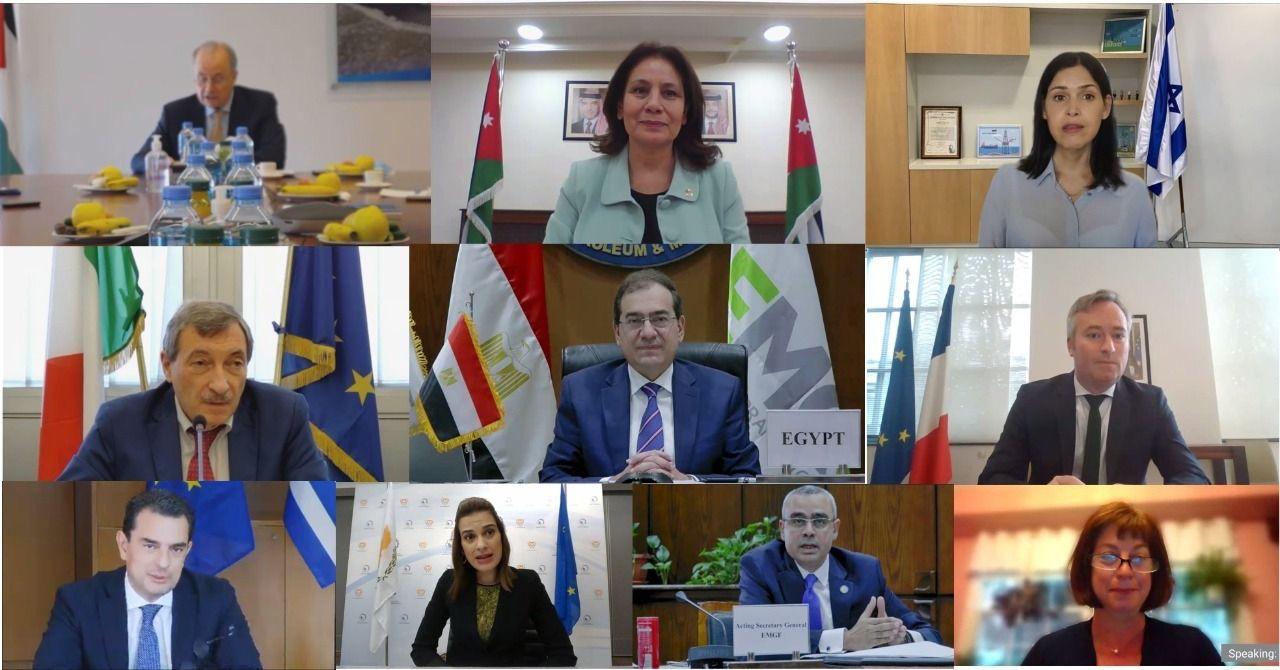 Today, July 6, 2021, the Fifth Ministerial Meeting of the East Mediterranean Gas Forum (EMGF) convened in Cairo – The Arab Republic of Egypt – under the Presidency of His Excellency Tarek El Molla, Minister of Petroleum and Mineral Resources of the Arab Republic of Egypt, as the current President of the EMGF Ministerial Meeting.
The meeting was attended by the Cypriot, Egyptian, French, Greek, Israeli, Italian, Jordanian and Palestinian Esteemed Ministers of Energy and Foreign Affairs, as the heads of delegations of the EMGF Members, as well as the American Acting Assistant Secretary of Energy who attended as an Observer.
Building on the outcomes of the Fourth Ministerial Meeting that took place in March 2021, the EMGF Members and Observers reaffirmed their determination to continue cooperating towards achieving the EMGF objectives in full respect of the rights of the EMGF Members over their natural resources in accordance with international law.
The Meeting witnessed an important milestone that is the signing of the East Mediterranean Gas Forum HQ Agreement by His Excellency Minister Tarek El Molla on behalf of the Arab Republic of Egypt and the Acting Secretary General Mr. Osama Mobarez on behalf of the Forum.
The Meeting discussed the progress of the EMGF activities including developments related to the four working groups established during the Ministerial Meeting in March 2021 and the progress achieved on the study of the “Regional Natural Gas and Energy Supply and Demand Balance”, currently undergoing with the support of the European Union.
During the meeting, EMGF Members accepted by consensus and welcomed the requests of the World Bank and the European Union to join the Forum as “Observers”. Additionally, the meeting witnessed the launch of the EMGF Website to be the forum’s first official communication platform highlighting the EMGF’s activities worldwide.
The Meeting endorsed the EMGF Secretariat Establishment documents, as well as the agreed timeline for the appointment of the permanent Secretary General that will take place by January 2022 and the EMGF budget for 2021 and 2022.
The Esteemed Ministers agreed on the next EMGF activities and roadmap and decided to convene the next Ministerial Meeting in Cairo during the last quarter of 2021.
Finally, the Esteemed Ministers expressed their deep appreciation to the Arab Republic of Egypt under the leadership of His Excellency President Abdel Fattah El-Sisi, for providing its utmost support as a host country for the EMGF, and the Egyptian Minister of Petroleum and Mineral Resources His Excellency Mr. Tarek El Molla.