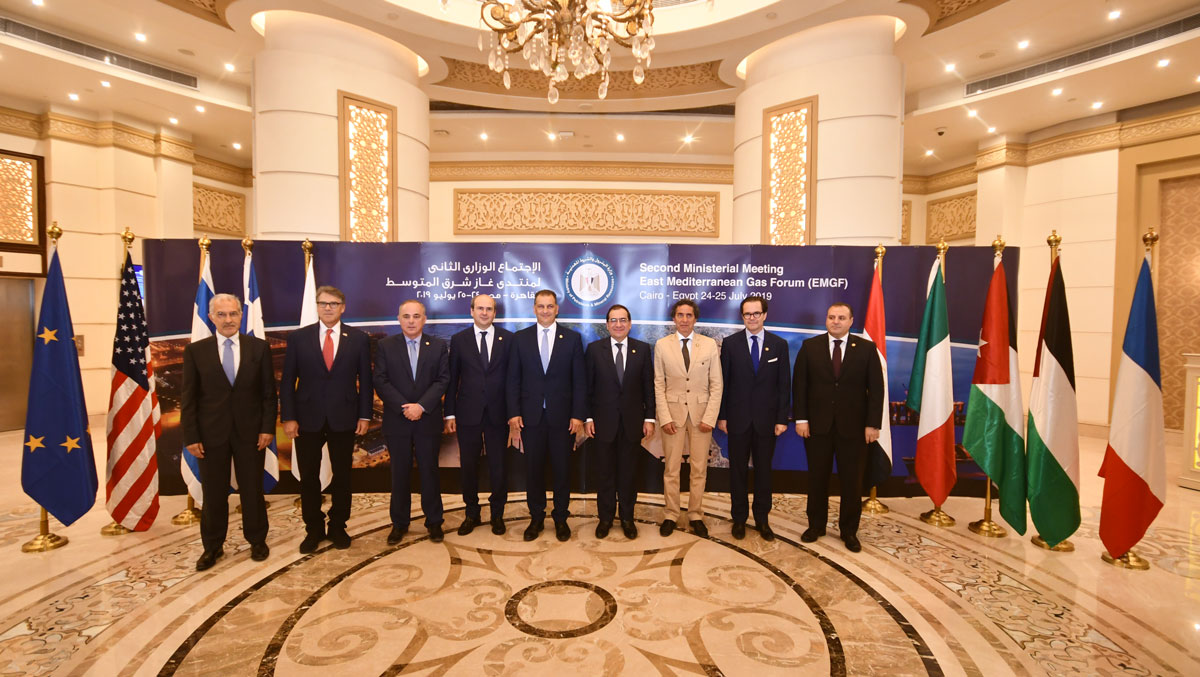 Upon the invitation of H.E. Mr. Tarek El Molla, the Minister of Petroleum and Mineral Resources of the Arab Republic of Egypt, the second ministerial meeting to consider the establishment of the East Mediterranean Gas Forum (EMGF) was convened in Cairo on July 25th, 2019.

The meeting was attended by the Cypriot, Greek, Israeli, Italian and Palestinian Ministers of Energy, and the representative of the Jordanian Minister of Energy, as the founding members of the Forum, hereinafter referred to as the Founding Ministers. The meeting was also attended by the US Secretary of Energy as a special guest, the Director General of Energy of the European Union and representatives of France and the World Bank.

The Founding Ministers decided to establish the EMGF in Cairo that fully respects the rights of the Members over their natural resources in accordance with international law. To this effect, they endorsed the Rules & Procedures governing the work of the High Level Working Group that was mandated to execute the activities of the Forum. They also affirmed their commitment to consider elevating the Forum into becoming an international organization and to work diligently to discuss and finalize its general concepts in accordance with the agreed framework.

In order to allow for private sector participation, the Founding Ministers also approved the establishment of the Gas Industry Advisory Committee and highlighted the importance of its role contributing to the Forum’s activities.

Building on the outcomes of the first ministerial meeting, the Founding Ministers highlighted their determination to continue cooperating towards realizing the objectives of EMGF with a view to fostering regional energy cooperation, in line with international law, to capitalize on the region’s resources and pave the way for a sustainable regional gas market. The Founding Ministers discussed ways of cooperation to gradually develop gas infrastructure corridors to expedite monetization of the existing East Mediterranean gas reserves, utilize the existing infrastructure and develop infrastructures to facilitate the exploitation of future discoveries, as well as to leverage the private sector expertise in this regard.

The Ministers agreed to convene the next Ministerial Meeting in Cairo during the second half of January 2020.

The Ministers and heads of delegations expressed their sincere gratitude to the Arab Republic of Egypt and to President Abdel Fattah El Sisi for hosting the meeting and the warm hospitality and excellent organization.