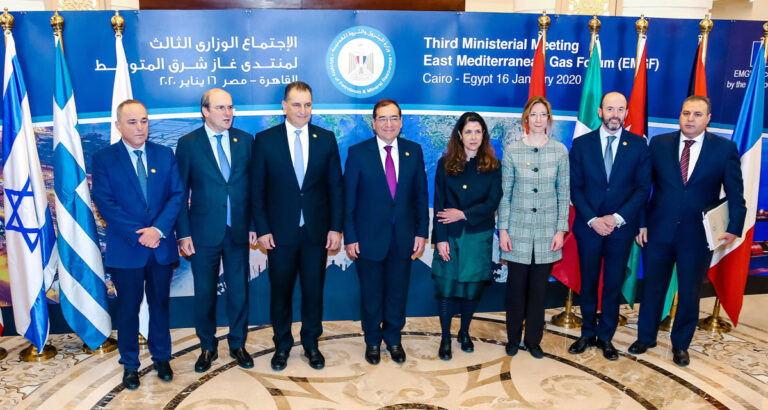 Upon the invitation of HE Mr. Tarek El Molla, the Egyptian Minister of Petroleum and Mineral Resources, the Cypriot, Greek, Israeli, Italian, Jordanian and Palestinian Ministers of Energy convened in Cairo on 14 January 2019 to discuss establishing the East Mediterranean Gas Forum (EMGF).

They affirmed the necessity of cooperation, on the basis of international law, in the East Mediterranean between gas producers; including potential producers, buyers and transit countries in the region, to enable greater mutual understanding, and awareness of common energy challenges and interests among the East Mediterranean countries. They emphasized their commitments to set the stage for fruitful technical and economic cooperation with a view to efficiently exploit the gas potential of the region.

The Ministers also affirmed their commitment to foster cooperation and initiate a structured and systematic policy dialogue on natural gas, potentially leading to the development of a sustainable regional gas market that could unlock the full gas resource potential in the region. They also stressed the importance of encouraging adequate involvement and contribution of the gas industry and the private sector including investors, traders, financing entities and other stakeholders in this regard.

To  this  effect,  the  ministers  declared   their   intentions   to   establish   the East Mediterranean Gas Forum (EMGF) with a view to establish an international organization that will fully respect the rights of the Members over their natural resources, in accordance with international law, and will support their efforts to monetize their reserves, utilize their existing infrastructure, and build ones as necessary for the benefit and welfare of their people.

The  Ministers  concurred  that  the EMGF’s main   objectives   would include, inter alia, the following:

The Ministers confirmed that the EMGF will be based in Cairo, Arab Republic of Egypt, and that any East Mediterranean country with gas reserves, a gas producer, consumer or transit country sharing the common interests and objectives of the Forum may join in the future after completing all the required membership procedures that will be agreed by the founders of the forum. They also declared that the Forum would be open for countries, or regional or international organizations as Observers, that it would promote outreach activities towards non-member countries, with a view, according to the circumstances, to foster dialogue, mutual understanding and reciprocal advantages. They also agreed that the private sector has a significant role within the EMGF, and would be invited to contribute to the Forum’s activities and organizational bodies as part of a permanent Gas Industry Advisory Group.

The Ministers expressed their sincere gratitude to the government and the people of the Arab Republic of Egypt, for their warm hospitality and excellent arrangements made for the meeting.